At Noah, we know shooting arc is one of the most important metrics in making more shots.

NBA Veteran Anthony Tolliver relies on his shot release to know instinctively whether or not his ball will have the perfect arc.

“Of course with the system, it tells you straight up whether or not your shot is flat or if it’s in a good spot,” Tolliver said. “I usually release [the ball] earlier when I get the right amount of arc. I usually hold the it a little too long if the arc is a little lower.”

Tolliver and Shot Mechanics coach, Colin Castellaw discuss how Noah’s data and research of over 140 million shots proves that a higher arc is not always a better arc.

“I think having too much arc is just as detrimental to your shot as not having enough,” Tolliver said. “The optimal range you want to get into is about that 44, 45, 46 range and however you can get it, obviously with the Noah system, that’s going to give you the best chance.”

Young players are often taught the higher the arc of a shot, the better chance it has to go in the basket. Coaches frequently claim that as the arc gets higher, the basket becomes a larger, more circular target. However, the method of shooting with a higher arc does not translate to more makes because high shooters will deviate the ball within three inches, front-to-back. 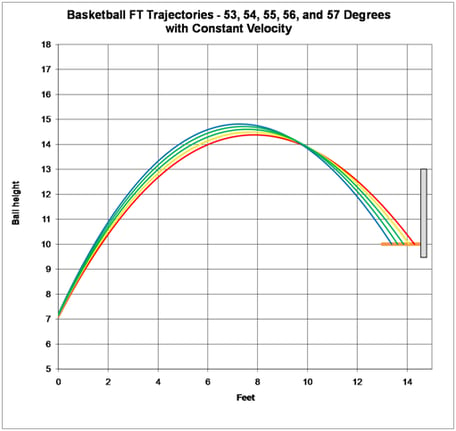 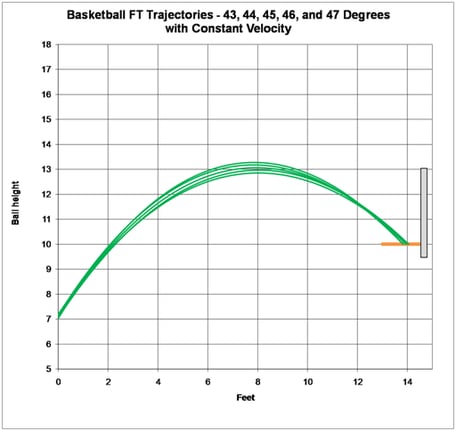 A shot at 45° (+ or – 2°) is far more consistent than a higher arc shot. (Graphs from https://coachingtoolbox.net/blog/the-science-of-shooting-a-basketball)

“That target area becomes really hard to hit if [the ball] is going back and forth like that,” Castellaw said. “So if you can reign it in, especially with the Noah System, it makes it a lot easier to hit more shots.”

If you’d like to read more about improving your shooting arc read Coach Collin Castellaw’s Shot Mechanics: Shooting Arc Secrets blog, watch the videos below, and stay tuned for our next Noah Pro Tips blog on Form and Shooting Straight.