The Science of Shooting: Left/Right

The Science of Shooting: Left/Right Position

Our third and final installment on our Science of Shooting series takes a look at the left/right deviation of a shot. As expected, the deviation of the ball from the centerline is one of the three measurements that affect the consistency and accuracy of a shot. If you haven’t read part I and II on the arc of a shot and the depth of shot, make sure to check those out for the complete breakdown of the perfect shot.

There aren’t many surprises when looking at the science and data around shooting in regards to left/right accuracy. So, we’re going to jump straight into the chart to start. Below is a histogram using the same data from the previous post about shot depth (that comes from about 700,000 NBA shots from practice during the start of the 2020 NBA season). The x-axis shows the left/right from the centerline of the rim and the y-axis shows the make percentage. 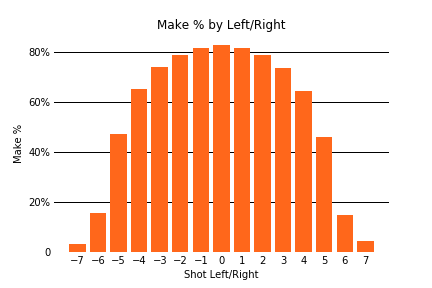 Obviously, the best you can do is shoot directly along the centerline of the rim and to do so consistently. In fact, left/right consistency and depth consistency are the two most predictive measures of shooting percentage in NBA players.

Shooting straight also gives you more leeway in the other two metrics. The rim map below shows makes and misses from a recent practice session: red dots are missed shots and green dots are made shots. You can see that along the centerline there is a fairly wide range of depths resulting in made shots. Whereas closer to the sides of the rim there is a very small range of depths where a successful shot is possible. Use the Noah system to practice shooting straighter consistently and watch your shooting percentage go up.