The Science of Shooting: Depth

The Science of Shooting: Depth

In part II of our Science of Shooting series, we focus on the depth of a shot, one of the three specific measurements that affect the accuracy and consistency of a shot more than any others. In part I we broke down the arc of the shot and in our next installment we will take a look at the left-right position. Each one of these metrics consists of key variables that produce either a made or missed shot.

Everyone loves the sound of leather on nylon as the basketball flies through the rim hitting “nothing but net.” But is a swish the ideal in terms of depth for a basketball shot? Sort of. It’s definitely not bad, but data shows a slightly different story.

The histogram below shows approximately 700,000 NBA shots (10-30ft range) from practice during the start of the 2020 NBA season. Shot depth is on the x-axis and make percentage is on the y-axis. 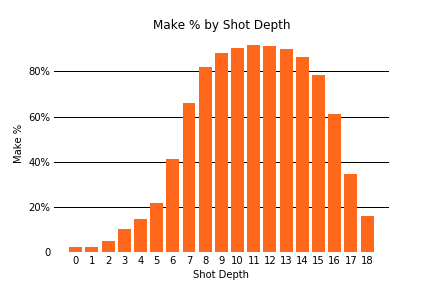 You can see that the highest make percentage in terms of depth isn’t actually in the center of the rim as you might expect; it’s shifted two inches back from center to 11” (where 0” is the front of the rim and 18” is the back). A swish generally only occurs between depths of around 7-11”. That leaves a lot of real estate at the back of the rim (12-15”) with a high make percentage. We call these BRAD (Back Rim and Down) shots and they are just as advantageous as swish shots.

So next time you are in the gym shooting, focus on getting the ball deeper in the basket and getting a mix of swish and BRAD shots.