Noah Across the Country

Noah Across the Country

With systems in over half of NBA facilities, hundreds of  NCAA gyms, and thousands of high school and training facilities, Noah is changing the game across the country by providing instant audio feedback and detailed shooting analytics to help all athletes develop their perfect shot.

Noah’s exponential growth over the last few years has led system activations into forty-two of the forty-eight contiguous states (shown in the map below), making Noah the nation's leader in shot tracking technology. In 2016 Noah also broke the international barrier by adding Vancouver to the list of locations. Since then, many other Canadian-based clients have joined the client roster. 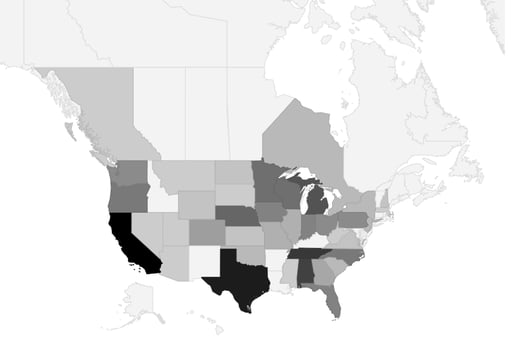 Some simple analytics reveal more interesting insights about the geography of Noah customers. Across the U.S. and Canada, California, Texas, Alabama and Tennessee lead the way in total number of customers per state. California sits at the very top with the most gyms using Noah technology.

Taking a step further and digging into the origins of the 260 million tracked shots, (unsurprisingly so based on the number of customers) those same four locations also account for the largest number of shots tracked. The Californian customers have accounted for tracking over 34 million shots with Noah, and Tennessee is the close second with over 26 million shots tracked. However, what’s more interesting is that Georgia and New York actually edge past everyone in the average number of shots tracked per customer. As it turns out while those two states host some next level programs, they are majorly dominated by high school and training facility customers. It’s probably safe to assume there’s a significant correlation between these stats and the fact that both of those states consistently rank in the top 5 of states that produce the most 5-star recruits. The heat map below provides a more detailed visual of our geographic distribution. 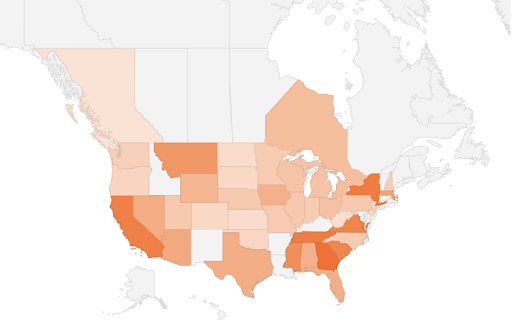 Noah is excited to continue this expansion not only in personal growth across the country, but also in the overall use of data and sports technology. Innovative brands like the Phoenix Suns continue to provide the needed support by ushering in new and advanced partners like Noah and Verizon to improve their training processes through analytics..

“The difference between high-level teams comes down to decision making,” says James Jones, three-time NBA Champion as a player and current Suns general manager. “The margins are small, and analytics are a tool to help you increase decision making. These players want to get better and information helps you improve. Our guys are interested in whatever advantage we get.”

Recently, the Phoenix Suns unveiled a new facility focused on technology, with two courts quite literally sitting as the focal point and center of the facility. The Sun’s new facility leverages several industry leading technologies, like Noah, all driven by Verizon’s new 5G. This advanced network provides the capacity needed for capturing tons of real-time data points from Noah and other technologies to give coaches and players a holistic view of each athlete’s performance. To read more about the Sun’s new facility and Noah’s involvement, click here.

Noah is excited to continue partnering with these performance-focused facilities at the forefront of sports technology. Interested in learning more about Noah Basketball or installing a system in your facility? Email us!