"For me personally, Noah played a huge part of our championship season. Our players became much more aggressive when they had the confidence to make free throws" - Coach Scott Rainville 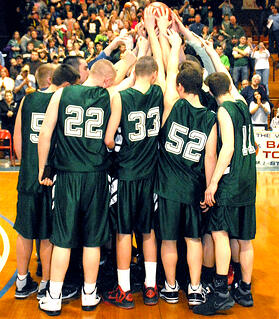 Danville High Coach Scott Rainville had just 10 practices to prepare his team for the boys basketball season opener last fall. With an offense and defense to install, Coach Rainville found himself scrambling for time to work on a few fundamental skills.

Plus, gym time was limited to just 90 minute per practice. Danville is a K-12 school in Vermont and has a senior class of 25 students. Though small in enrollment, the school’s basketball program boasts many levels, which all share the gym space.

“It was hard to allocate time for free throw shooting at the beginning of last season,” said Coach Rainville, who has a 52-18 record in three seasons at Danville. “With 90 minutes for practice, we didn’t find the time to make the Noah Instant a priority. We didn’t work with Noah as much as I’d like, and it showed early on.”

The Indians shot 5 of 17 from the line in that season opener, which was good for 29 percent. Though Danville won convincingly, the game was a harbinger of the poor shooting to come.

“That game was the turning point,” Coach Rainville said. “I decided that we needed to devote 30 minutes on the Noah Instant every practice. We needed to allocate the time and make it part of our routine. What good is it going to the line 30 times when you can’t make your free throws?”

Danville had advanced to the Vermont Division IV state championship game two of the previous three seasons only to lose. Coach Jim Nelson led the Indians to the title game in 2011. Then Coach Rainville took the reins and guided Danville to the championship game in 2012. Danville lost in the state quarterfinals in 2013.

Danville started its 2014 state tournament with an impressive 36-point victory while shooting 72 percent from the line. The Indians followed that performance by cruising to a 19-point win. In the state Final Four, Danville hit 26 of 32 free throws to defeat Rochester, 67-60. The free throw attempts differential was 32 to 10.

“We pride ourselves on our defense not committing fouls,” Coach Rainville said. “We want to make more free throws than the other team attempts.”

In the state finals against Twin Valley, Coach Rainville and his team found themselves down 10 with 4:08 left on the clock.

The Indians shot 10 of 13 free throws in the fourth quarter and 13 of 18 for the game (72 percent). The majority of the last 17 points came from the line as Danville won its first state championship in 25 years.

Twin Valley was just 0 of 2 from the line with both being the front end of a one-and-one.

“For me personally, Noah played a huge part of our championship season,” Coach Rainville said. 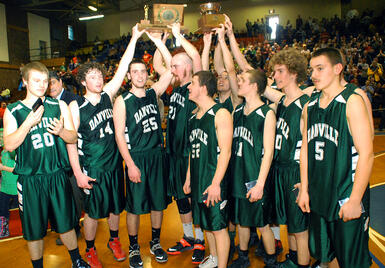 “Our players became much more aggressive when they had the confidence to make free throws. They drove more to the basket. When they got offensive rebounds, they would try to put it back in instead of bringing it back out. The more they practiced with the Noah Instant, the more they gained muscle memory and confidence. One of the guys won our Senior Night game by hitting a free throw with just a few seconds left.“

Coach Rainville urges all coaches to not make the same mistake as he when he didn’t devote enough time to the Noah Instant early on — especially for schools the size of Danville.

“Danville athletics are really just a bunch of guys who give it all they have in every sport,” Coach Rainville said. “We are a small Vermont town where citizens really back their kids from grade school to high school. Kids work very hard and everyone wants to be a part of it. They really buy into it.

“That’s why the Noah Instant is especially important for us because many of our student-athletes play multiple sports,” Coach Rainville added. “It’s very likely when they play basketball, they haven’t shot the ball since the previous season. We just don’t have guys playing all year round, working on their game and shooting. The Noah Instant helps us catch up.”

Several seasons ago, Danville purchased the Noah Select system. But with the school’s gym time being so limited, it was difficult for teams to wheel out the system and practice with the Noah Select consistently.

Then Coach Rainville heard about the Noah Instant, which is always on and mounted to a wall. He immediately liked the idea. In fact, he thought the Noah Instant could help the program so much that he bought one for the school.

“I’m by no means wealthy,” Coach Rainville said. “But I knew Noah would take us to the next level and felt very strongly about it. I told the folks at Noah that I love to fish and hunt and I could have used the money for myself, but this was an investment in the future of our program. It paid off already with a state championship.”

When the team returned from winning the title, two state troopers escorted their bus into Danville. Behind the bus were the town’s fire truck, ambulance and half the citizens. It was quite a special moment.

Coach Scott Rainville welcomes any questions from fellow coaches regarding the Noah Instant. Please contact him at scottrainville6@gmail.com.